The original Dark Souls is without a doubt my game of the decade. Everything from its interconnected world, skillful mechanics, and ever-deepening story shows the brilliance in its design. What really keeps me coming back though is the creativity of its modding community.

There’s mods to fix bugs and improve quality-of-life. There’s mods to increase difficulty and modify progression. There’s even mods which change and expand the world in completely new ways.

The relatively-new mod Daughters of Ash falls into this latter category. A massive expansion to the game, it adds new items, bosses, and storylines.

I’d been following its development for some months and was excited to finally give it a try. Almost on a whim I decided to record this playthrough. I thought it might be interesting to compare notes with others, and I was also looking forward to getting some experience with video editing. This would be my first “Let’s Play”.

I opted to use OBS for recording. I’m a big fan of free and open-source software, and it came highly recommended.

I didn’t start with a video editor. In fact my early episodes consisted of stitching mkv files together and uploading the resulting file. YouTube offers a rudimentary video editor which allowed me to trim and split the clips. It was rough, but it worked.

The first ten episodes or so came quickly. I was able to record them in rapid succession - usually one per day. As a result of the tooling I ended up keeping in most of the content unaltered.

Eventually however I started to run into limitations with my recording setup. I was only recording to a single audio channel, and that made it impossible to stifle coughs or other noises. I was also reaching a point in the playthrough which required that I cut out content more often. YouTube’s editor was not equipped for either of these tasks.

I decided to address the audio issue first. I looked into configuring OBS to record to multiple audio channels: one for the game, one for my voice. This necessitated switching into the “Advanced mode” but otherwise seemed to work just fine. I discovered that YouTube ignores multiple audio channels, so I had to remux them into a single stream before upload.

Next I needed a video editor. I shopped around before deciding on Davinci Resolve 16. As a professional editor it offered a lot more tools than I really needed, but it offered Linux support and the price was right. I spent some time recording sample clips and playing around with the timeline tools, transitions, and the other features I thought I’d need. 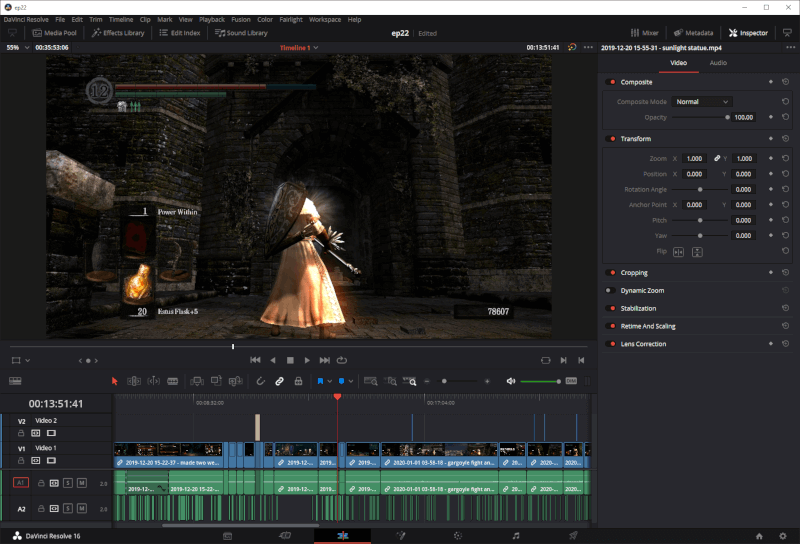 The first video was a disaster. It turned out that when I switched OBS into Advanced mode it didn’t preserve any of my original settings. I was so preoccupied with testing the audio channels I didn’t think to compare the video quality. The episode I recorded was so low-quality that I had to discard the entire thing.

I spent some more time getting the settings right. It wasn’t trivial to copy over the “Simple” preset, and it involved browsing a lot of forum pages and even the source code to understand what had changed. Eventually I got my settings worked out so they looked just as good (if not better) than the original preset did.

Equipped with some new tools, I started making real improvements to the quality of the videos. I was able to edit out any excess noise from neighbors or physical button clicks. Transitions became a lot more natural, rather than being hard cuts at every turn. I normalized the audio to make it more consistent. I also started experimenting with small overlays to add additional details (or sometimes just to laugh at myself).

One issue that I was never able to fully solve was YouTube compression. I could export a video at a crisp 1080p, but after YouTube processing it would turn muddy and dark. I spent a few days recording sample clips just to test different encodings and bitrates to learn how YouTube would treat it. After a lot of testing, I found some optimal settings and determined that anything above a bitrate of 20K would be lost to compression.

Other obstacles cropped up. It turns out that video files are pretty large. I had to buy a dedicated 1TB SSD to work on, as the optimized media for editing can easily exceed 600GB for an hour-long episode. A solvable problem, but now I was spending real money.

As I became more proficient with editing, it started taking longer to produce each episode. I wanted to get it all perfect: the sounds equalized, the content properly paced. All these little improvements slowed things down. I’d even started recording at night to try and reduce background noise. What had started as an episode per day had turned into one every 1-2 weeks.

I was producing better quality content, but the process had started feeling more tedious and unfun. Without my realizing it had become a second job.

This may be the curse of the perfectionist. The more options we have available, the more decisions there are to be made.

It reminds me a little of programming. When we start, we really don’t care about “clean code”, design patterns, or abstractions. We’re just excited to see our code work. It’s only with experience that we start to notice all the things that can be improved. Maybe that’s how it feels to become more proficient in any field?

By the time I’d reached the final episode, I was ready to move on. I’d learned - and not for the first time - that the perfect is the enemy of the good.

I am glad I embarked on this project though. I’ve learned a lot about video production which may actually come in handy in the future. I’ve also created something of which I can be proud. It might fluctuate in quality here and there, and the rough start might put some people off. But in a funny way it shows both my progress through the game and my progress as an editor. I can appreciate the symmetry of that.

You can find my LP of Daughters of Ash on YouTube. Big thanks to Grimrukh, the developer of the mod for his amazing contribution to the Souls community.